December usually finds me obsessing over all things Christmas, which is completely true this year as well. However, this December in particular brings on another obsession of mine as well: Star Wars!

Rogue One will be released this month (my husband pre-ordered our tickets for opening night!), so at the same time my excitement was building for this new movie, I was also trying to figure out what throw pillows to use for our bedroom re-design. It's pretty safe to say my excitement for the movie influenced my pillow choice! 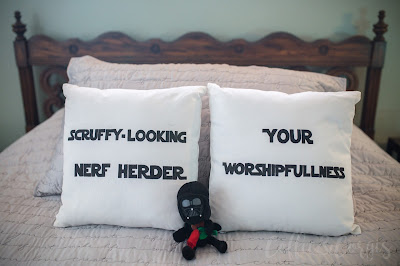 I quickly decided that I wanted Star Wars-themed throw pillows, but couldn't find exactly what I wanted that was half-way affordable. Thus- I busted out my crafting side and make it happen! If you live under a rock and have not seen the original (and better) episodes IV, V & VI, these are some snarky names used by Han Solo and Princess Leia for each other. My hubs and I are both pretty sarcastic with each other, so with our love for Star Wars, this was perfect! 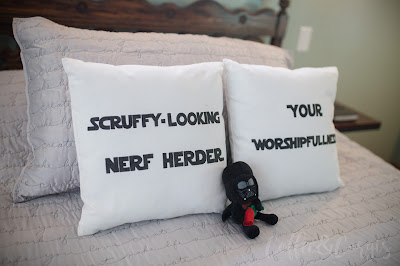 It was super easy as well; even the non-crafter could easily do this in an hour or two! I ordered the pillow cases on Amazon and found some craft pillows at JoAnne Fabrics. If you can sew instead of buying the cases- go for it! The only other item I used was a fabric pen. I personally selected a Sharpie fabric dye marker from Hobby Lobby. (I'd recommend two in case one dries up)

If you're like me and already messed up your first pillowcase and want a bit more of a satisfaction guarantee, a pre-printed design might be a good option. I printed the text in a SW font and secured it underneath the fabric in the placement I wanted, first tracing it with a pencil, then filling it in with the marker. It ended up being so easy! Pay attention to the directions of the marker or dye you use, as some need to be set with an iron before use!

For a pretty easy craft project, these pillows turned out better than I had hoped! I love the addition to our bedroom without affecting the aesthetics too much. I mean, if I were to do a full Star Wars room, I'd just go all out and get a hovercraft bed, Wampa-skin rug and Rancor head wall-mount. (A girl can dream, right?) 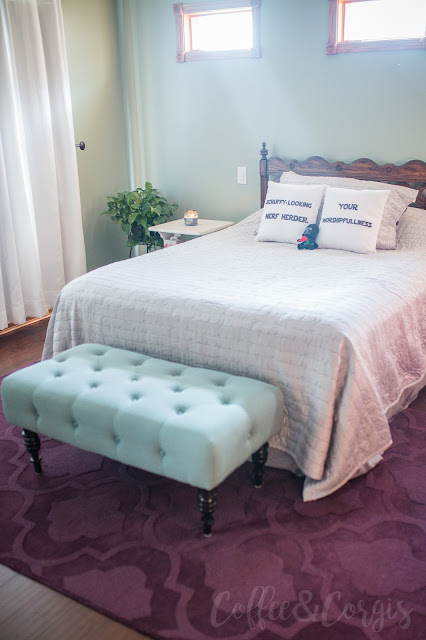 I also kinda love the Darth Vader plush to make the point a little stronger. It happened to be one of my punny valentines from a few years ago! "The force is strong between us" never gets old. :) And it's a miracle the dogs haven't destroyed it yet like they did the Yoda plush. "Yoda one for me!"
...  funny, right? anyone? Bueller? 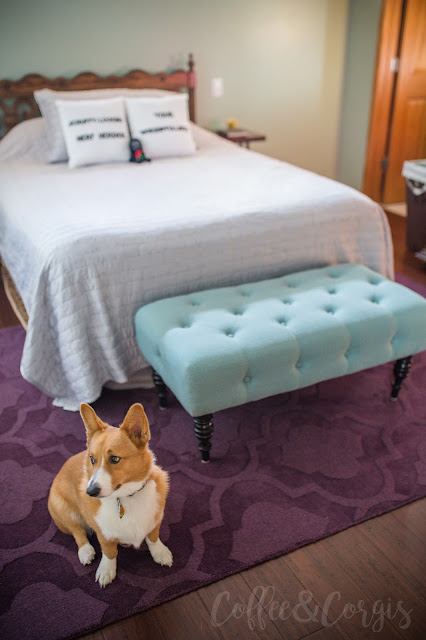 Hopefully this has inspired you to personalize your pillows. Wookiee doesn't look too thrilled, but I'm sure he is inwardly wishing I'd make him his own mini-pillow.

Let me know if you're going to be doing your own version of this project- I'd love to see them! 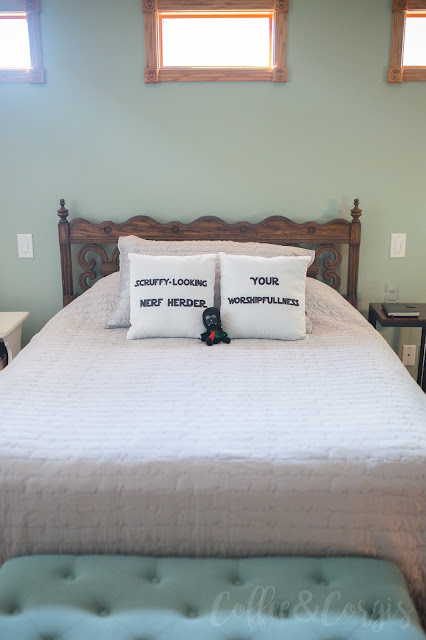