Now, as you can tell by the title, I'm pretty crazy about Coffee and Corgis, although I am quite attached to one Corgi in particular, so I wanted to give you a brief history on this adorable pup you'll see around this blog: 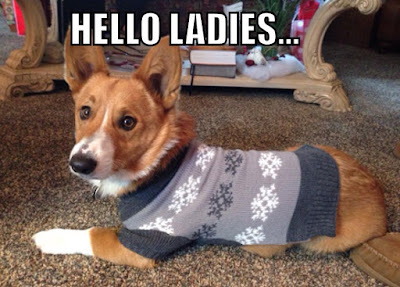 This is Wookiee- that's what you get when you and your husband are both Star Wars fans! He is a Pembroke Welsh Corgi we adopted when he was 8 weeks old.
Now that he is coming up on 2 years old, he is definitely part of the family! He joined our two other pooches, Luke & Louie, and now they make a pretty adorable trio, don't you think? 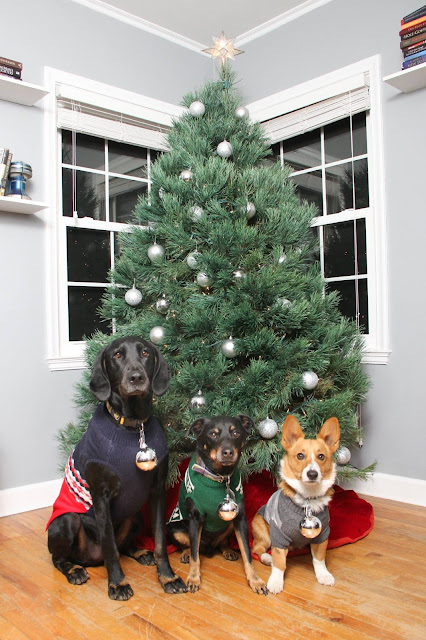 Of course, my favorite pics are when he was just about 9 weeks old: 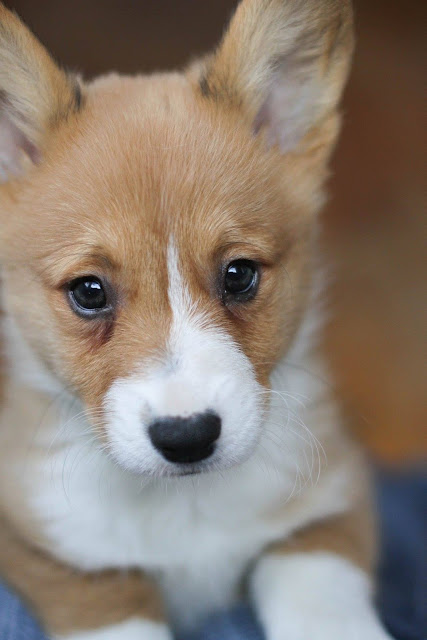 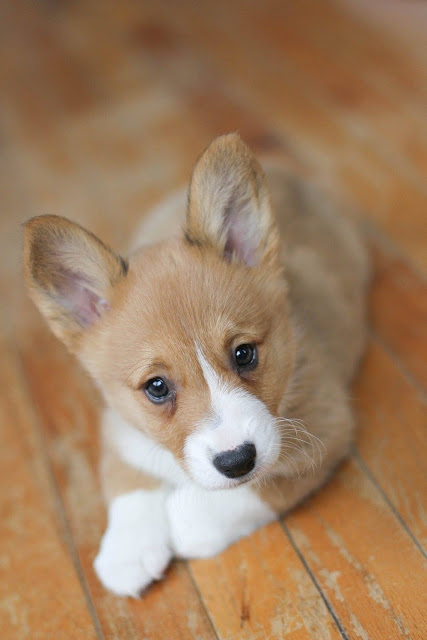 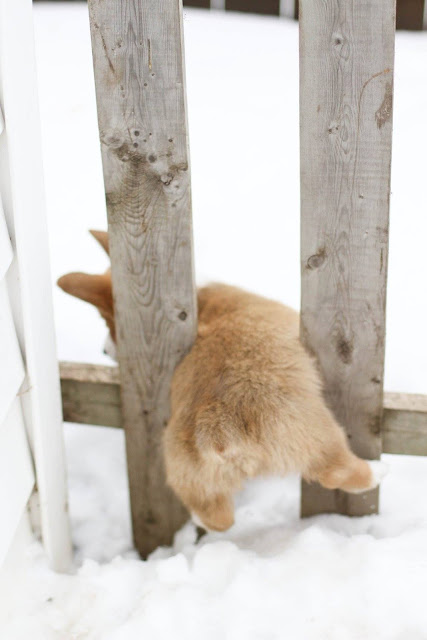 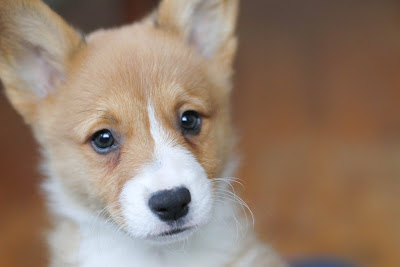 Isn't that just the cutest face you've ever seen? 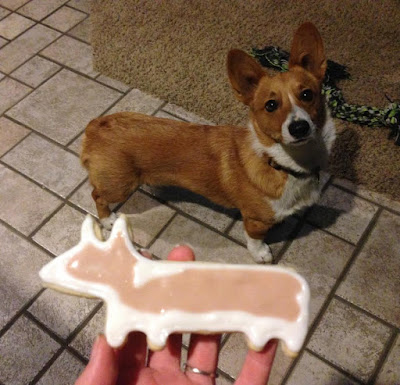 Although he does get into mischief... 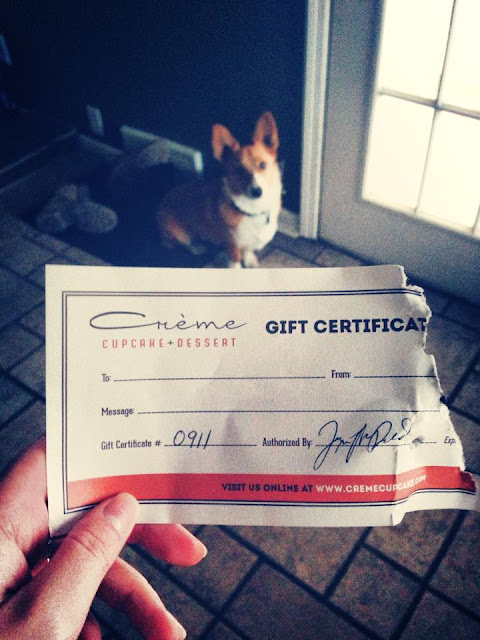 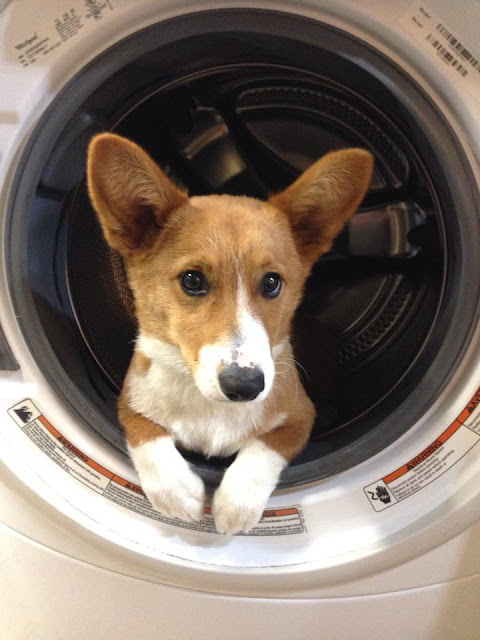 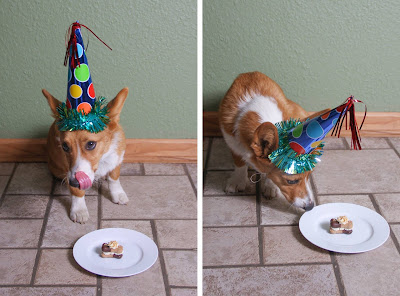 I would definitely recommend a Corgi to anyone who is looking for a sweet loving pup. We trained him right off the bat, so he's great about keeping quiet and not herding us, although he loves staying right by our side!

Posted by Unknown at 4:34 PM No comments:

I confess... I only took one design class in college. My brother has always been the designer, but I have not! Even so, I still love to putz around and experiment.

My position at my job shifted from receptionist to handling all of our design and event planning, so through experience in amateur invitations and event details, I have really become much better over time!

I'll get into more on events later (and how to do them on a small-business budget), but for now, I just thought I would share the invitations for one of my recent events! I'm pretty proud of them since the only thing I have to work with is paint and Microsoft Word! 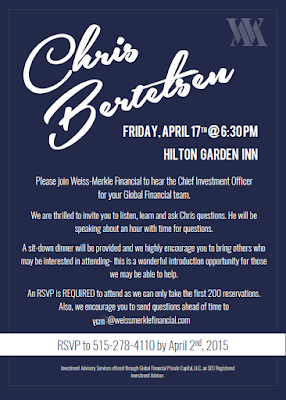 Invitation (back is navy) 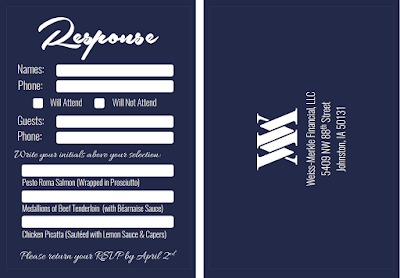 The response card front and back (I pre-stamped) 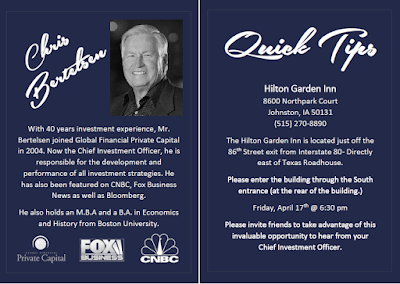 Bio card with quick tips on the back 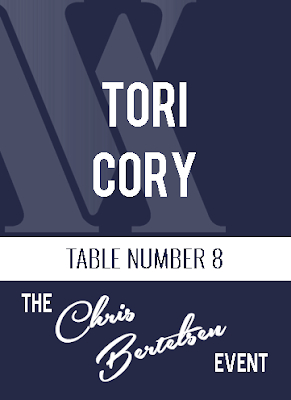 I'll periodically be posting more design and print ideas, but I really love the navy and white crisp design of these. The guests really loved them and it brought the event together in a personal way- not the typical stuffy appearance of a business presentation!

Have a wonderful July day!
Posted by Unknown at 9:48 AM No comments:

My husband's one request for his birthday was chocolate. (Big fan of dark chocolate!) and I knew I wanted to make him a cake that resembled a cow-pie, but only because I really wanted it to say, "Holy, crap- you're old!" I know, I know: loving wife, right?

But after searching the internet high and low for some cute looking cow-pies, I came up with no good simple recipes that didn't require shaving down a cake or that just looked downright disgusting. I mean, they had to be cute at the same time, of course!

So I have created a super simple "recipe" for these chocolate cow-pies: 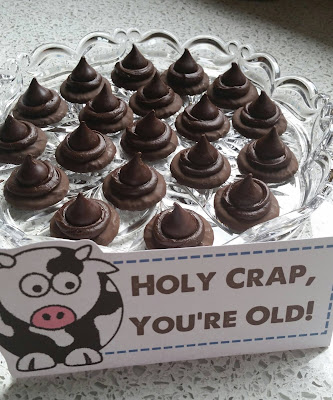 Beyond that, it is simple! Start with an Oreo Creme, pipe about a tablespoon of chocolate frosting on the top center, then press a kiss into the frosting. You should end up with what appears to be a mini cow-pie!

I would highly recommend making a similar sign to go with it so it makes a little more sense.

My husband got a kick out of this and they ended up being quite good! Let me know if you have some great ideas on your own cow-pie creations!

Posted by Unknown at 9:47 AM No comments: 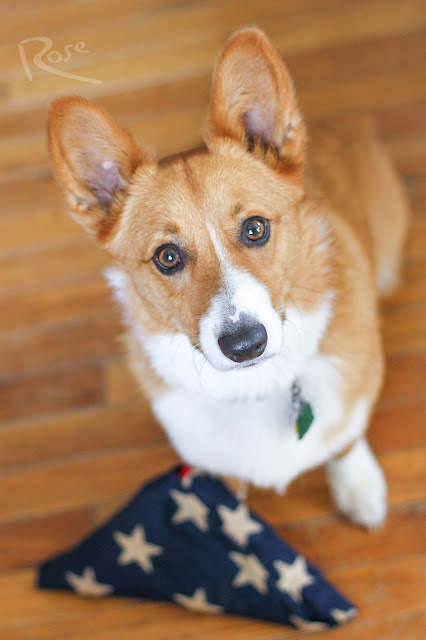 You've probably realized by now that I have a love for alliteration. It's a problem. I'll admit it. I will also admit that I love planning things. This is why every holiday gets me in a bit of a frenzy with dreams decorating and craft projects- and also why I got so excited that my wonderful husband was turning 30!

This past weekend was his birthday and since I didn't give him any kids by the time he hit 30 (as he jokingly requested when we got married), I decided a party would suffice!

First off, parties are expensive! Especially when you really want to invite and feed about 50 people! I decided to keep it as low-cost as possible and scoured the internet for inspiration and ideas.

Since he was born in the 80's, I thought an 80's party would be a lot of fun to plan, but wanted it to reflect his favorite parts of the 80's, so I started off designing my own invitation I thought he would find entertaining: 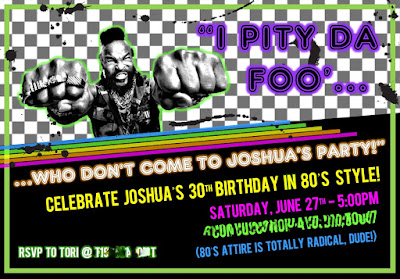 Video Games were a huge inspiration since my hubs is a gamer nerd. I ended up with Pacman ghost tablecloths, Firepower cheese puffs and some Pacman garland. 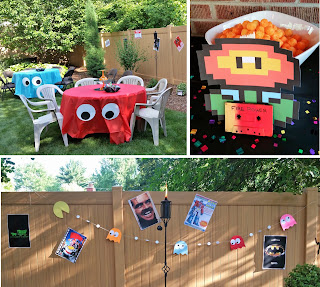 Plus, he is a huge fan of 80's movies, so movie posters were plastered all over. There were about 35 in total- and it was super cheap to print them at home! I ended up numbering each poster and as guests arrived, they took a trivia sheet and guessed each movie, video game or TV show that went with each poster (for a Star Wars Lunch box prize!)
There was also a "Guess the Legos" display and a Darth Vader Pez dispenser prize. 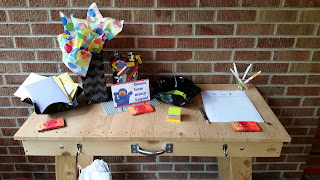 Pretty much all of the decor was made from things I already had (construction paper, yarn, paint) and what I didn't have, I either was given or purchased from a thrift store (old records and cassettes.) I found a great tutorial for a record cupcake stand- which turned out great (as seen below), but it is now chalked up as a Pinterest-fail. Apparently you can't leave those outside or they actually start to melt in the heat! They still looked kind of fun, and cupcakes were still consumed, so no big deal. 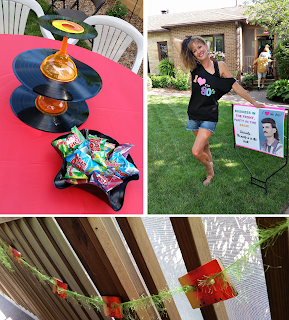 The entire food table was thankfully on the deck in the shade, but I admit I am pretty proud of the floppy disc sign, the faux-polaroid banners of him as a kid, cassette food labels, record bowls and record plates. (Just a printed CD label centered on a black plate!) And what better foods to have than doritos and pizza? I guess we had to throw in veggies for something healthy. :) 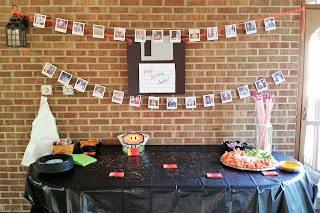 My favorite part of the party, however, was the photobooth. It was a little janky and fell over in the wind a few times, but I just splatter painted a few black tableclothes and set up my lights.
People had a great time posing for photos with a few props: Even Ferris Bueller sang us a solo! 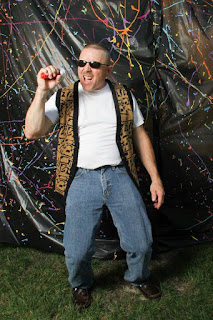 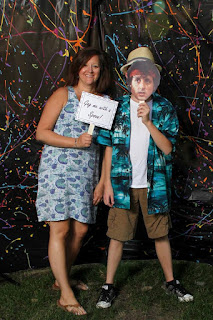 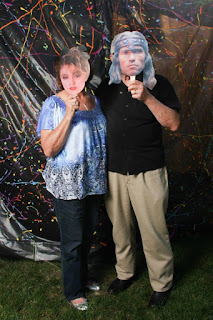 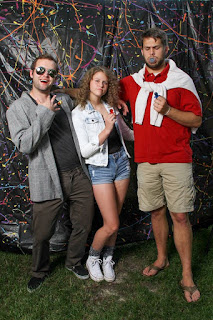 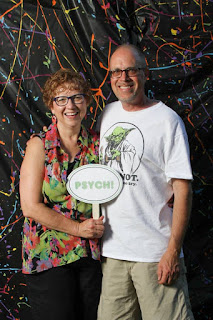 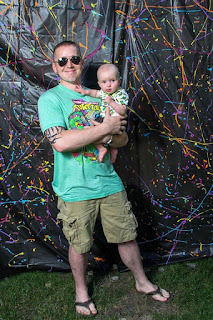 Overall, the party was a blast and people loved the personal touches. The hubs had a great time (and loved that I did it on the cheap) and I learned that it never hurts to ask for discounts on LARGE pizza orders! :)
Posted by Unknown at 10:54 AM No comments: